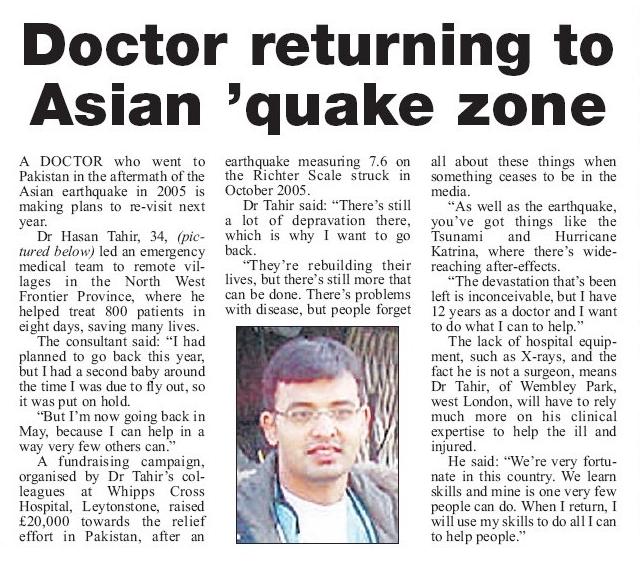 A doctor from Whipps Cross University Hospital is preparing to travel to Pakistan onSaturday to help survivors of the South Asia earthquake.

I have now returned from Pakistan having spent eight days there with my team providing medical assistance to the earthquake victims.

I would firstly like to wholeheartedly thank World Islamic Mission Welfare Trust and Whipps Cross University Hospital in supporting me in my trip to Pakistan to help the earthquake victims. I would also like to thank Noor Ul Islam Trust in Leyton, Waltham Forest Muslim Burial Trust, Masjid-E-Ali (AS) in Luton and the Local Community for their support and donations for this cause.

With the help of Mr Imran Abbasi of Whipps Cross Hospital acting as a coordinator, I was able to raise £18,500 and was also generously donated a substantial amount of essential drugs by the hospital.

I departed for Pakistan on the 29th October. I led a team of two doctors and two paramedics. During our days there we were linked to the AMC Disaster Management Cell in Abbottabad and the World Islamic Mission Welfare Trust. We visited a number of towns/villages including Abbottabad, Balakot, Mansehra, Bagatram, Ellieah, Hawellia and a remote area in the mountains of Kohistan.

In total we saw approximately 800 patients. We were helped by the Pakistan Army, airlifting us to a number of mountainous regions in the Northwest Frontier Province of Pakistan. One particular area was in Kohistan where we were the first medical team to arrive after 3½ weeks. Throughout our mission we saw numerous patients with chest infections, gastroenteritis, wound infections and urinary infections. We dealt with post surgical complications and rehabilitation. We dealt with a number of burns as a result of campfires and treated a lot of cases of scabies.

The money that was kindly donated to this mission was used in many ways. Approximately £6,500 was used by my team to help with individual patient’s medical treatment, purchase of medicines and medical equipment including plaster cutters. Money was also distributed to families in the tent villages (approximately 200 families); books were purchased for children to help restart their studies; bottles of mineral water for each family in a number of tent villages were purchased and finally money was given to a number of families to help rebuild their properties.

The remaining monies were used by the World Islamic Mission Welfare Trust to help with funding of operations, opening of dispensaries in remote parts of Kashmir providing free medicines and finally funding of longer term redevelopment projects.

It is very clear that the rehabilitation and redevelopment of the areas affected by the earthquake disaster will take many months if not years. Generations have been lost, millions of people have been left homeless and thousands of children are orphaned. Although the official death toll at present is approximately 80,000 people, with winter setting in, without adequate housing, clothing and heating this no doubt will increase substantially. Further with potential overcrowding in the tent villages and poor sanitation there is also an increase risk of diseases. There is a dire need for financial support and as such I would encourage you all to please continue to contribute further to these poor and unfortunate people.

You can do this in many ways including donating to the charity that sponsored me – World Islamic Mission Welfare Trust or donating to any other charity that is supporting the Earthquake Disaster cause.

I would like to thank you all once again for encouraging me and supporting me in my humanitarian mission to Pakistan.

A doctor has flown out to Pakistan to help treat earthquake victims.

Before leaving he told the Guardian: “World Islamic Muslim Welfare Trust has a well co-ordinated approach. It first sent a team of orthopaedic specialists to the earthquake zone, as many of the initial injuries were broken bones and crush injuries. 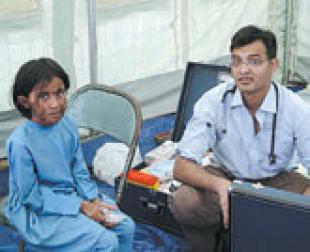 A doctor who went to help people hit by the Asian earthquake has spoken to the Guardian of his experiences.

Dr Hasan Tahir, 32, who works at Whipps Cross University Hospital, spent eight days in Pakistan which has lost 80,000 of its people as a result of the disaster.

Leading a team of two doctors and two paramedics, Dr Tahir visited a different refugee camp each day to treat patients, most of whom had infections which we would consider minor but which would become very serious if left untreated.

Survivors of the Pakistan earthquake have been forgotten and urgent intervention is necessary to end suffering, according to a local doctor who recently visited the region.

More than 75,000 people were killed and at least as many injured when the earthquake hit the north of the country and Kashmir on October 8, 2005.

It is estimated that 3.5m people were left homeless and Dr Hasan Tahir, consultant physician and rheumatologist at Whipps Cross University Hospital, says more needs to be done to help the survivors, many of whom are still living in desolate circumstances.

An Enfield doctor who continues to help with medical aid in Pakistan following the 2005 earthquake, says survivors of the disaster are being forgotten.

Dr Zafar Iqbal, a GP and exercise and sports physician, who came back from a relief trip to Pakistan earlier this year, said that people in the remote northern region of the country continue to suffer the impact of the earthquake which killed 75,000 people and left hundreds of thousands homeless.

Along with his colleague Dr Hasan Tahir, a consultant at Whipps Cross Hospital, Dr Iqbal stays in regular contact with people in Pakistan and hopes to continue making trips to the country primarily to provide follow-up aid.

No longer in the glare of the world’s media, life is still a struggle for many of the forgotten survivors of the 2005 earthquake in Pakistan.